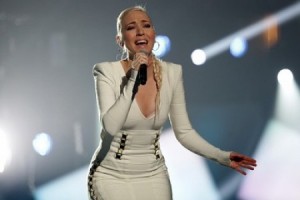 Well it’s that time of the year again and the final of the Eurovision Song Contest is upon us. Now whilst I cannot hand on heart say that I have ever been a fan of this TV event, I have at times been compelled to watch it, not least because of the humorous commentary by Terry Wogan and more recently Graham Norton. This year I have decided to take a more active interest in the competition itself and having discussed the final entries, the Vinylization panel is ready to cast its votes. Well we’re ready to point out the more interesting entries at any rate.

Here then are the votes of the Vinylization judges (one point each ((cough))).

One point goes too…

Yes, believe it or not the Armenian entry has been co-written by legendary Black Sabbath axe man (and fellow Brummie) Tony Iommi. Quite how this has come to pass, we are not too sure of here, but it is a significant moment in Eurovision history. Personally I don’t even like the song but hey it gets a point from the panel because of the great man. Yes we’re biased, so what?

And one point goes too…
BELGIUM
ARTIST: ROBERTO BELLAROSA
SONG:  LOVE KILLS
WRITTEN BY: JUKKA IMMONEN & IAIN FARQUHARSON
There are a number of reasons this one got a vote. The guy has our kind of voice that’s for sure, a little hoarse and he wouldn’t be out of place in a rock band. Belgium are set to rule the world, just look at the football team that’s developing for Christ’s sake, and perhaps most importantly, this edgy type of rock / pop could actually win the thing. Oh, and Farquharson is such a kick-ass name.

And another point goes to…

Is it the great song and brilliant performance that gets the Vinylization vote? No it’s because of the quite immortal lyric “Because of my shoes, I’m wearing today. One is called love, the other is suede.”  WTF??? We kid you not. I laughed so hard, I used a whole toilet roll on my nosebleed. Do not miss this, we beg you. It will be one of the funniest Eurovision moments ever and gets a vote because it’s seriously funny.

Oh, and another point goes to…

This couldn’t sound more ‘not Spanish’ if it tried, with its Celtic opening and upbeat Indie rock tempo, it’s a decent slice of pop and we quite liked it anyway. No it not is co-written by arm biting Liverpool strikers either, before you say it. Well worth a vote we think. Would have got more praise if Suarez hadn’t continually got suspended and cost Les valuable dream team points.

And a completely not nationalist at all vote goes to…

SONG: BELIEVE IN ME

To be honest although Bonnie Tyler has a great voice, we don’t particularly like the song, but it’s the UK entry and we are completely biased. Also if we don’t vote for ourselves, then who the hell else will?

And the runner up in this year’s contest is….

This doesn’t get a vote because we actually like this, good God no. It’s a ridiculously contrived piece of dance music by an established artist in an attempt to woo voters but….you can go for a coffee while it’s on to alleviate the tedium, you can toss pancakes to it, but most importantly, Germany are sending Rammstein over the channel to grace Download this year. So one good turn and all that.

AND THE WINNER IS…

BY AN ABSOLUTE LIGHT YEAR….

SONG: I FEED YOU MY LOVE

What on earth is this doing in the Eurovision Song Contest? It’s a quite brilliant song wrapped in Electronica, dark and moody and performed superbly by Margaret Berger. For once we have had to dispense with all the sarcasm and jokes and say that, even if this doesn’t win (and it defies belief if it doesn’t ), it is already the winner for us. VOTE. VOTE. VOTE.

And that concludes the voting from the Vinylization panel for this year.

Congratulations to Norway for such a brilliant entry.

The flaming Danes won with a song that was…that was….well entirely Eurovision.

Norway still won as far as we were concerned, great song with a brooding atmosphere and feel to it.

The Russians lost 10 points from Azerbaijan and whinged, at all levels about it.

Why do they even care? We think it was a disgrace they got any votes at all.

For those of you who don’t live in Europe and are wondering whether we actually take this seriously.

No we don’t, honest.

The show should carry a disclaimer next year:

Eurovision does not reflect the musical talent available in any European state , nor does it any way reflect the taste of the European community who do actually like music.

ARE WE BITTER? YOU BETTER BELIEVE IT!