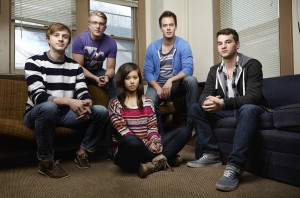 After the delights of the Eurovision Song Contest sent me into a musical coma, afraid to turn on the radio, scour YouTube, or check out anything new, just in case I was driven into doom and despondency by what some folks laughably pass for music, it came as a welcome relief when Vinylization got a follow on Twitter from these guys….and gal.

I wasn’t disappointed. Melodic pop-rock in the style of  Paramore, Third Eye Blind according to the band’s page on Reverbnation, but I would swing them a lot closer to Jimmy Eat World than the previously mentioned artists. The crunchy guitar work, interwoven guitar licks and soaring harmonies coupled with great songs, propel them into a different league to some of their peers. At this present moment, their musical presence consists of the EP, A Lot To Learn. Consisting of five songs, including the single: Brace Yourself, this serves as a fine taster for what is to come.

The band hail from northeast Indiana and possess a political edge to their lyrics, actively connecting with worthy causes and institutions. They implore their generation to take an active interest in the world around them and not to stand idly by, whilst others determine the state of the world around them.

In Jason Best’s own words, ” My immediate thought was that our generation likes to talk a lot but lacks a sense of action. We’re complaining about the issues but taking no initiative to change them. ‘A Lot To Learn’ is a charge to our generation to be the change.”

So take note folks and get involved now, and while you are doing that don’t forget to embrace The Remony. They are well worth the effort.

THE LAST DAYS OF PLANET EARTH

Les’s shameless link to his book.