x
by Lezick
on May 9, 2013
under Reviews
tagged Jimmy Eat World, The Goodnight
∞ Permalink 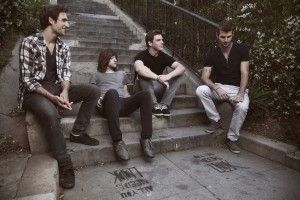 There are times when despite a history of head-banging, shred guitar and jumping up and down until my hamstring goes, I just want to sit back and enjoy the warm tones and melodies of some softer styled rock. Let’s face it, there is only so much head-banging you can do anyway before your hair starts to fall out (well that’s my excuse). So where do you run to, who do you turn to, when you need a band to lose yourself in. I hold my hands up and admit that for a long time I have loved the way Jimmy Eat World construct their songs. Jangling guitars, strong mid-range male vocals and light harmonies, under-pinned by real instruments and great melodies. Slipknot, it isn’t, but I seriously don’t want to have to shave my head. So whilst this might not be for everyone, Rammstein fans I’m looking at you, although, wait a minute, I’m a Rammstein fan. Okay Rammstein fans as well, here’s the pitch. If you want to enjoy the heady days of a long hot British summer ((cough)) with a nice cold beer and without your family or girlfriend telling you to turn the music down, then checkout The Goodnight. The Goodnight are a four piece melodic rock band, originating from Clancy, Montana.

They have one album out called Keep Control released in 2012. This is the summer’s day you have waited for through the long winter and I recommend Budweiser, a slice of lemon and a recliner; then just open your ears to happier times. The stand out track remains the single from the album, The Love Left In You but the rest of the album is a delight of melodic rock too.

Don’t believe me? Then either check out the links above, the video below or both.

The domination of the music world by the big three still continues to restrict the growth of new talent,  but the unrestrained resource of the internet and the ability to create new outlets without the restrictions of a blind generic policy will break the chains of the music loving people of the world and set them free, to once more wander the airwaves and breathe in the fresh and unpolluted new artists that are out there. Go on! Set youself free!

And yes, I have just watched The Hobbit again.

As ever links below for the artist. Let your own ears by your guide and adviser.