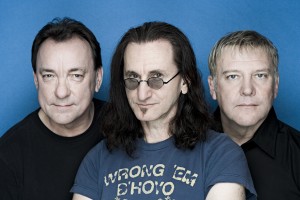 It’s been 38 years since Rush came on the scene with their first self titled album. They were accused at the time of being Led Zeppelin clones and to be honest I remember first hearing them on The Old Grey Whistle Test and thinking exactly that.

Oh how quickly that all changed though. Rush shifted through the gears despite the protests of their record company going through a simple rock sound to the much more progressive albums albums such as Hemispheres. It did not stop there with the style changes though and both Permanent Waves and Moving Pictures added more synthesisers and a more commercially accessible form of progressive rock to the Rush style stable. Now the Led Zep clones had transformed into progressive rock leaders and then had actually managed to gain radio play time with the more synthesiser driven sound coupled with the retention of hard rock style.

‘Signals’ heralded  Geddy Lee and his synthesisers and sequencing becoming a more palpable force in the Rush sound with Lifeson’s guitars seemingly taking the back burner. It should be noted however that this was partly due to the bigger synthesisation Lifeson’s guitar sound itself.

‘Presto’ heralded the start of a return to a more guitar based sound and also a movement away from the progressive rock genre, culminating eventually with the release of Vapor Trails on which you will not find a single synthesiser or guitar solo.

On their previous release ‘Snakes And Arrows‘ we find Rush at the edge of hard progressive rock and we were left wondering what direction would they take on their next offering?

Well Clockwork Angels has arrived and our questions answered!!

Well which Rush do we get this time? Let’s have a look!

The album consists of 12 tracks which have a combined length of 1 hour 6 minutes.

If you’re a lover of subtle album artwork then look at the time displayed on the album cover. The time is displayed at 9:12 on the clock face which if you then read as a 24 hour clock equates to 21:12 a reference to Rush’s classic album of 1976.

So what about the music?

‘Caravan’ is the opener with a moody synth opening leading into a heavy riff and a tempo that just pulses along before leaning into the synthy chorus. Caravan very quickly gives up the game as to which direction Rush have taken on this release. The good news for Rush fans and all is that they have taken all their previous styles and combined them into one album. Everything is here and nowhere is this more evident than on this opening track. Heavy guitar, bursts of synth, growling bass from Lee and yes a guitar solo from Lifeson. Neil Peart’s drumming is superb and varied and never robotical. Excellent opener.

‘BU2B’ is up next and opens with a jangling Lifeson guitar sound and Lee warbling in the background before thumping into metal territory with an in your face riff and the very recognisable Lee vocals and phrasing. This is a much more guitar driven track but still has the wall of sound to it and once more is filled with variation and tempo changes. It strikes you very early on that the guys have given this album particular care and attention. It’s a good start ladies and gentlemen!!

‘Clockwork Angels’ the title track of the album and possibly the track which combines the biggest variety of time changes and elements. Lifeson drives this with more chord than riff orientated guitar and also the open stringed guitar harmonies so associated with Rush. Time changes are sprung upon you quickly and without warning almost immediately. Lee’s vocals are supplemented with is own harmonies and also fade in / fade out harmonies. The guitar solo is almost secondary to Lee’s wonderful grumbling bass. Whilst the title track is without doubt an attempt at a more epic proglike track it never changes theme too much and keeps in touch with the chorus at all times. It’s a good track but not one of the best off the album for me whereas the following is undoubtably super.

‘The Anarchist’ just opens up fast and positively jogs along with Rush sounding like the tremendously talented 3 piece that they are. Chord driven guitar once more with great drumming from Peart,  but it is the imperious bass work once more from Lee that lifts this to another level. The chorus I just love, maybe because it takes me back to the better moments from Vapor Trails. Anarchist just never lets up though even when the bass roll bridge drumming of Peart has Lee’s vocal dancing around it before exploding back into the verse. Keyboards fill like strings at splendid moments particularly towards the end of the track. Lifeson’s arabic guitar solo comes in before we glide back to verse and the hairs on the back of the neck finale. Great track and brilliant drumming, guitar and keyboard fill but…Oh my god!! That Bass!!! Superb!

‘Carnies’ follows and you can’t help but wonder whether this is gonna be ‘After the Lord Mayor’s Show’. After all, how do you follow The Anarchist? Well the answer it seems is to follow it with a song that has a heavier riffing and lick to it and ultimately showcases the guitar work of Lifeson and the drumming of Peart rather than the song itself. So, particularly because of the clever style change injected near the end before a return to heavier guitar work, the answer is that it’s not a case of  ‘After the Lord Mayor’s Show’ but more of a case of ‘And Now For Something Completely Different’. Great way to follow a killer track.

‘Halo Effect’ is the sixth track on the album and has the almost obligatory clean guitar opening with a slower tempo. So is this the ballad bit you ask? Well kind of but let me say right now there is an absolutely delightful guitar break in the middle of this track and the keyboard fills are superb. So yeah it’s a little slower and a bit of a ballad and a much shorter track but super nevertheless.

‘Seven Cities Of Gold’ has a Rage Against The Machine style riff that leads into a more obvious Rush style chorus interspersed with a 3 chord lead in between the main riff and lick. 4 minutes in and the track breaks down into intermittent drums with a steady foot on the bass pedal and guitar full of reverb and echo like a flock of seagulls.  I just know that some people are going to love this track more than others because of the styling, but for me it is one of the weaker more obvious tracks on the album.

‘The Wreckers’ is the track which shows the softer side of Rush with a much lighter bit of guitar work from Lifeson accompanied by slightly restrained bass and drums. Also add to this the vocal which is clearly held back from any shouts or screams by Lee and what we have here is the the closest thing you are going to get to the ballad track. Complete with middle eight and string style keyboard fills building and grandiose chorus this is another hairs on the back on the neck track. Superb!!

‘Headlong Flight’ must be the most heard of track off the album as it was sprawled across Youtube from the very start. Here we have the Bastille Day style riff we have all been yearning for and the pumped up bridge that breaks back down then throws us all hurtling forward at breakneck speed again. No wonder they called it Headlong Flight. But this is Rush and it wouldn’t be Rush without slowing the tempo right down before bursting out of the blocks again. Guys just listen to the grumbling bass and drums here! Artists at the top of their game on this track, belting out unrelenting fury for the masses, how well could you mosh or headbang to this one at Download. What I really love about Rush is that even in the studio they never lose sight of the fact that they are a 3 piece and are more than willing to break it down to it’s bare components before filling out the sound again. Utterly brilliant track!!

‘BU2B2’ is the eigth track and consists of 1:30 mins of Geddy Lee and strings and that’s it. The perfect little break before…….

‘Wish Them Well’ which is undoubtably the sing along anthem from the album. It starts off with the chorus and goes along at medium pace before breaking into the verses and various harmonies which ultimately just wanna build back up to the singalong chorus. Having said all that it’s the unrelenting intensity that drives this track along just the same as the rest of the album. Variation hits at 3 minutes in with a chnage in tempo and a middle eight which is singalong in itself before…. you’ve guessed it….get your lighters out and annoy the bloke next to you with your very unrushlike vocal to the chorus. Splendid stuff.

‘The Garden’ brings us to the end of the album and opens in true acoustic guitar style with Lee singing clearly to this most appealing of finales. This has obviously been written as the last track for the album and like the last piece of music on a film you love it brings proceedings to the end you have dearly hoped for. Adding drum and bass at the second verse this builds and builds with the light string fills adding to a much cleaner sound than the rest of the album.Four minutes in and the vocal is accompanied by light keyboards before breaking into a guitar solo then building to a crescendo of sound completely achieving the sense of finale.

In summary then we could all put our feet up in life and live gently without rocking any boats or putting any real effort into our work. Thank god Rush are the opposite of this!. What they have achieved here is nothing short of classis. Despite the years under the belt and the different styles and sounds attained they have still managed to write and perform an album of variation and marvellous musicianship with some fantastic songs to boot. When I first heard of Clockwork Angels looming on the horizon I thought that this could be a case of one album too many as in all honesty I certainly was not a fan of Snakes And Arrows. Nothing could be further from the truth. Let’s lay it on the line here. If you are a Rush fan then you have to own this album. If you are not a Rush fan then you have to won this album. Quite simply one of the best albums of recent years and destined to be a classic. Buy It Now!!!