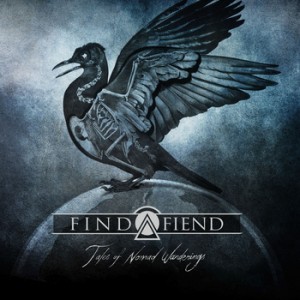 Find A Fiend have released their second album with the title of Tales Of Nomad Wanderings.

Their sound can be compared to Biffy Clyro with its crisp production and clear melodies. The album comprises of just over 27 minutes of what the band term popgresive metal and is another solid offering to build upon their fine debut album of 2008. It comprises of eight tracks and is available from Amazon and their homepage in MP3 format. See links at the end of the post.

The energetic opener Aldebaran kicks off proceedings, introducing us to the trademark crisp guitar work and fresh production that Find A Fiend excel at. Melodies and harmonies surround the punchy rhythm and there is a great short guitar solo to add to this fine song. This is probably our favourite track from the album.

Before Next Sunday is a slightly slower paced mid tempo song that has a catchy chorus and once more makes use of harmonies and tight rhythm work to augment the sound. I believe this is the single from the album and an excellent choice for a single it is too.

The Selfish Grail Part I: Philistine Distortion is next. The band generate a full sound once more without ever losing the clarity of the song. The strength of the band owes much to the strong song writing and attention to detail with harmonies and melodies. It’s just a damn good song.

Apoapsis provides a brief instrumental interlude that serves as a break before the next longer composition.

Worth Fighting For ambles onto the scene with some delightful guitar interludes and a change in tempo. This track reminds me so much of Bad Religion, particularly the album New Maps of Hell. Punchy rock delivered with intelligence and elegant harmonies.

How Soon Is Too Late is a slower track with a heavier guitar serving to underpin it, but still with the same melodic guitar licks surrounding the structure. The guitar solo has a more sharper tone to it than on some of the previous tracks and serves as the outro for the piece.

The Selfish Grail Part II: Bastard’s Lament is a short instrumental which serves as as the intro to…

The Selfish Grail Part III: The Hand That Shivers. The opening guitar work is picked and the slower tempo builds with growling bass and punchy drum work. I love the guitar lead bridging that follows the opening verse and effortlessly builds into chorus and a much fuller sound. There is so much invention with timing and melody here. The devil is in the detail.

So we have briefly covered the various tracks to break the album down into its individual components, but the real strength of Find A Fiend is in their ability to couple strong bass and percussion with the interlacing licks of melodic guitar and shifts between heavy and light  guitar riffs. Add the emphasis on melody and harmonies that the band insist upon and you have a marvelous second album from the guys.

Their is no doubt that the band have their own distinct style but we have to say that if you love Biffy Clyro you are going to love Find A Fiend.

I can’t state strongly enough how important it is to promote and help bands with real talent these days, and Find A Fiend exude talent in abundance.

Yeah it’s okay for us to say that, but make your minds up for yourselves by checking out the video below:

If this is the first time you have heard the band then do yourselves a favour and check out the links below, which also incorporate Find A Fiend’s superb self titled first album.
Go on, support real talent and breathe life into the music industry by discovering Find A Fiend. You’ll thank us for it, we promise.

CHECK OUT THIS EXCELLENT REVIEW