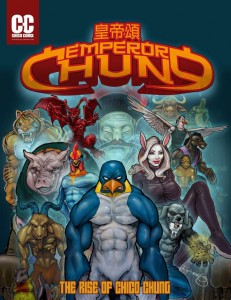 It’s Friday, it’s One O’Clock it must be Emperor Chung.

Very interesting five piece band from the Midlands, with a leaning towards progressive rock and melodic songs.

In their bio on Reverbnation, they say that their material has one unifying concept  which is both original and slightly tongue-in-cheek.

As far as we know there is only the single release, “The Bloodline.”

There is an album coming out shortly, so we are very much looking forward to that one.

You might wonder why we are saying check out Emperor Chung when there is so little material to check out, but that’s exactly the point, the small morsels we have been fed so far are immediately captivating and make it even more imperative to go and check out the guys live.

For those of you who do, comments on their live set would be greatly appreciated.

In the meantime, here are the morsels.