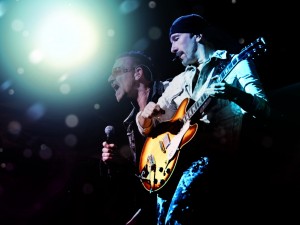 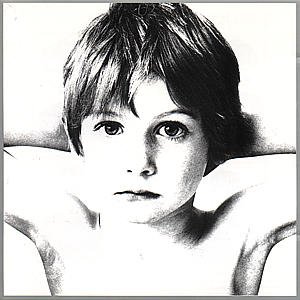 There are times in life when you do things you know you shouldn’t. There are times when you know exactly what is going to happen as a result of this and therefore it makes absolute sense to

resist the temptation to do it and not inflict the consequences of this action upon yourself.

So why the bloody hell did I sit and watch U2 doing the most obvious greatest hits set at Glastonbury on Friday night.

Many years ago I witnessed a reasonably unknown band thrashing out a killer performance of a track called “Out Of Control”. They were not perfect but they had bags of energy and bite and I tell

you right now the plodding version of “Out Of Control” on Friday night had neither.

Bono recently told the Sun that after surgery maybe he should change his name to Robo-Bono. Well I wouldn’t say things like that to the press if I were you because after Friday night’s performance it might just well stick.

I’ve seen it said many times by music journalists and posters in forums that Glastonbury isn’t the place to be playing new music. Says it all really!!!

Good to know that security guards haven’t changed much over the years too and given the chance to pop some bloke’s balloon they promptly took it! Classic stuff!!

I spent god knows how much time ranting at people to buy “Boy” (Sorry, couldn’t resist that one). I spent even longer trying to work out October and then literally forced “War” down friends and family’s throats. Great stuff. By the way, greatest hits set and no “New Years Day”???

Since those days the never ending reverb and echo laden guitar work has took it’s toll on me, but I still watch and listen and applaud when they produce something of consequence.

Dorian Lynskey of the guardian wrote “they pull it back with a rampaging version of their punky debut single Out of Control, a reminder of when they were unknowns with everything to prove.”

This was in reference to the set which he felt lacked energy. That very song, performed as an encore no less, epitomised the lack of energy.

Take the time to recover properly Bono, get yourselves back in the studio and record some new material. Don’t pander to the masses, do what you think is musically right for you now.

Take us back to a time when you were unknowns with everything to prove. I know there can be so much more to come both collectively and individually from yourselves, so please do us all a favour and let it all out.