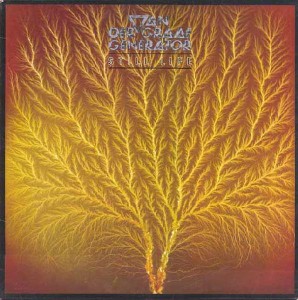 Having plugged a death/prog metal album it’s now time to go back quite a few years and journey into the realms of the strange and wonderful. Van Der Graaf have been labelled as progrock by most but remain unique, almost the band you’d file under miscellaneous. For a lot of Van Der Graaf fans their finest moments would usually be Godbluff or Pawn Hearts, but for me this the highlight of their catalogue. Hugh Banton’s organ takes more prominence than previous albums and for the most part the album delivers a semi operatic/classical style with bucketloads of pomp.

The album opener feels lightweight with Banton’s organ circling around the Hammill’s soft almost choirboy like vocals which turn to a whisper in the prelude to the chorus which changes course again by the Lanza like phrasing coupled with the growling snarling peaks. Hammill’s voice has always fascinated me just because of the characterisations he achieves with it. Witness the “all of us pilgrims” high pitched scream and snarl at one point.

Still Life, the title track again opens with organ, this time with a much doomier feel. The consistent operatic styling remains but this time builds to a crescendo which explodes into heavy riffing, angry screaming vocals and brilliant saxophone before evolving back into operatic mode and eventually sliding away quietly to the end. Hammill’s take on the boredom and futility of immortality is grandiose and thoughtful. Having said that I’ll probably still volunteer for immortality if it ever comes along Peter 🙂

La Rossa comes next and opens again with meandering organ. Hammill’s take on being afraid to take the next step into a more physical relationship with someone he values as a friend and adores. It leads fairly quickly at a jaunty pace into a more spat out chorus, but the whole piece changes time and again to quieter more solemn moments. Full of angst and self examination, it ends with a style that doesn’t seem to fit with the rest of the piece for me. Despite that it remains one of my all time favourite tracks from them.

My Room (Waiting for Wonderland) is the opening track of the second side. I don’t think I’m alone when I listen to an album that I’m really enjoying but waiting for the bum track 🙂 . I just don’t like it and I don’t get it. Maybe someone, maybe even Mr Hammill himself 🙂 could pop on here and sell it to me, but for the time being I will continue to skip it, I konw, I know I should give it another chance, but seriously….

Childlike Faith In Childhood’s End is the last track and belts out this observation about “what waits for us” with spitting, snarling, shouting, crying desperate vocals. All styles of the previous tracks meet here and transform into an epic track which changes moods and style frequently. This is my favourite track from the album as everything is here and it’s a classic example of the old “he means this” arguments that used to rage between fans. Thoughtful and disquieting, you really have got to play this just to get the feel of it.

Overall then this is a must have album for me. I don’t have many musical heroes oddly but Peter Hammill is one, and for that sir I salute you. Furthermore who else has ever written stuff like this…