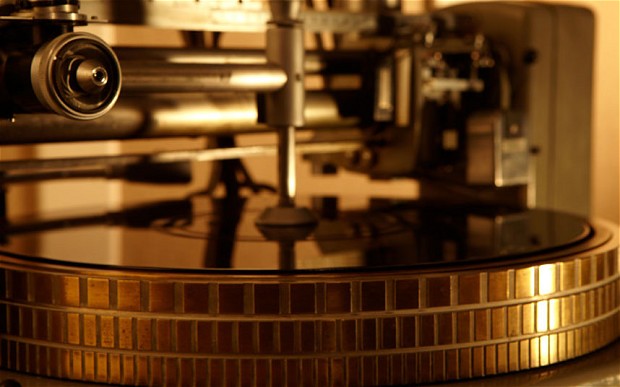 Classical vinyl: what goes around comes around – Telegraph.

Adam Sweeting meets the record producer who has declared war on the MP3 and is releasing rare classical tracks on vinyl.

Not even Phil Spector, the obsessive architect of pop’s Wall of Sound and a mono recording fanatic, ever went to such extremes as the Electric Recording Co. Under the single–minded helmsmanship of managing director Pete Hutchison, the company has embarked on a campaign to resurrect some of history’s most sought after classical recordings, using authentic cutting equipment from 50 years ago and pressing the results on finest–quality vinyl. The first two releases area set of Bach solo violin sonatas from 1954 by the Hungarian violinist Johanna Martzy, and the rare box set Mozart à Paris, originally issued by Pathé Marconi in 1956. Both in mono, naturally.

It’s hardly a project maximised for commercial gain. “If you wanted to make money you wouldn’t do this,” explains Hutchison, as we sit in his studio in the shadow of London’s Westway. “This isn’t a Dragons’ Den project.”

Rather, it is a personal mission, with an impetus more philosophical than commercial. It’s a heartfelt salute to an era of painstaking analogue recording when music was cherished for its artistic and spiritual qualities, and wasn’t just digital background noise to listen to on your iPod or laptop.

It may be a while before Hutchison can judge whether he has succeeded or not, since only 300 copies of each release will be pressed, and these will only leak out at the rate of five per month. He has licensed a further 80 recordings from EMI and Columbia. “I’ve no idea if we’ll sell them all,” he says of his first releases. “The Bach set has been out for a few weeks and most of the ones we’ve sold have gone to China.”

Ironically, it’s pop music which has given Hutchison the means to launch the Electric Recording Co. Though his beard and long hair make him look a bit like a survivor from a prog rock band from 1973, his 20 years running Peacefrog Records have seen him release a string of techno discs from the likes of Luke Slater and Suburban Knight. He has also enjoyed success with offbeat acts such as José González, Nouvelle Vague and Little Dragon. His secret passion for the most esoteric tributaries of the classical tradition began about 12 years ago when his father died and left him his classical record collection.

“I gradually started delving into them, became enthusiastic about them, and then started collecting classical records,” he says. “I grew up in a house where if we went into the sitting room and my mum and dad were playing a record, we couldn’t talk over the music. It was a meditative thing, and you sat down and listened like you do at a concert.”

The rush to ever–cheaper, easy–to–access music designed for convenient consumption has horrified Hutchison. “With CD, things started going downhill because everything sounded harsher,” he growls. “Now the MP3 is a sort of compressed version of that, so it’s the worst possible thing you could be listening to.”

He declared his own personal Year Zero, and set about recreating the conditions in which what he regards as history’s finest recordings were made. He had started collecting the prized first pressings by English classical labels such as EMI and Decca from the Fifties and Sixties, and “I found myself getting into quite deep water in terms of my expenditure”.

Some of these discs cost many thousands of pounds, so it occurred to Hutchison that he could cut out the middlemen and go back to the source. He would find the original master tapes and the original cutting machinery, and remake the discs in a fresh and pristine form.

Original Fifties mastering equipment is even harder to come by than many of the records it was once used to create, and Hutchison had to go to Romania to find what he needed. He gestures at a machine behind him, a robust metal cabinet covered with old–fashioned meters and knobs, with a hefty brass turntable on top.

“This is the only complete stereo valve cutting machine in working condition that exists,” Hutchison reports, proudly. “It was made by Lyrec of Copenhagen, and in its day it would have cost roughly the price of an average house. It weighs about a ton.”

Another massive piece of machinery is an EMI recorder originally installed at Abbey Road studios in the Fifties, so large that you wonder if they had to take the roof off to get it in the building. Both of these machines are powered by chunky glass valves rather than miniature transistors, which accounts for their bulk.

To restore the machines to full working specification, Hutchison called in sound engineer Sean Davies, who’d worked at Decca in the Sixties.

“He’s as old as the machines, he’s in his late seventies,” says Hutchison. “He has a big place in the country where he keeps all these vintage parts, and if we needed an electrolytic capacitor Sean would say, ‘Oh, I might have one of those back in my barn’.”

Remarkably, the master tapes of the Bach and Mozart material had been preserved in excellent condition, though that didn’t mean the remastering went without a hitch. Editing used to mean physically cutting the tape and splicing it back together, but over the years the splicing tape had lost its stickiness, so the 50–year–old edits would often fall apart. Each time that happened, the cutting process had to be restarted, wasting a £50 vinyl lacquer (from which subsequent copies would be made) on each occasion. Hutchison then tried four different pressing plants before finding one he was satisfied with, after destroying two full pressing runs which he considered substandard. He is adamant that the recreated LPs should sound exactly as they were originally intended to, and not modified to reflect current tastes.

“There was a temptation to say ‘We’d better add a bit of bass and smooth that out a bit’, but I said no, I don’t want any of that. For instance the Mozart records sound quite ‘toppy’ because that’s how they were recorded, but I didn’t want to alter them with modern equalisation because that ruins it. It might sound good today, but in 20 years it may sound worse.”

The records would not have been complete without matching artwork, and this too has been created with a fanatic’s attention to detail. Hutchison recruited boutique printing firm Hand & Eye in east London, who used a press from the Sixties to replicate the creamy card sleeves and detailed text and illustrations of the originals.

For future releases, Hutchison has earmarked such connoisseur’s favourites as Ukrainian fiddlers David Oistrakh and Leonid Kogan, and Hungarian cellist János Starker, and may even venture into stereo with some vintage Bruckner.

But it’s the journey that matters to him, as much as the outcome. “This was just something I needed to do, and I feel good that I’ve done it,” he says.

“We all need to do less emailing, less texting, and find space to think of ideas and be creative. We need to listen to music from a record and read a book printed on paper. This is me saying ‘This is when music was at its best’.”

Johanna Martzy Bach discs are available at £300 each and the Mozart à Paris box at £2,495 from theelectricrecordingco.com