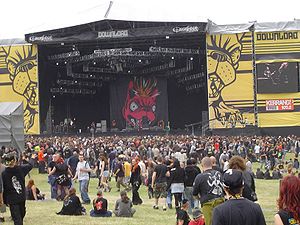 Yes it’s coming towards that time of year again when the masochistic metal lovers in us shell out £180 for 5 days of bad smelling tents, unusable toilets, half dead bodies lying on top of your sleeping bag, and an uncountable amount of “sorry mate”s from clumsy sods you’ve never seen before and obviously never saw you. Expensive food, hangovers from hell and well…you know.

But fear not because all of this is worth it as the line up at the Download Festival makes it all worthwhile…or does it????

Danzig -Ok someone needs to clue me in here. Who are they? What am I missing? So no comment as just don’t know?

Korn – Sorry but got no idea how to put the r back to front before anyone points it out. Respectable band to appear at any metal festival, so no problem there.

Pendulum – Metal??? Really??? Are they an annual fixture now then? I mean I quite enjoyed their set last time. But..no!!!

Alter Bridge – Again clue me in. I will check these bands out. But do they deserve to be over Korn if this is the running order?

The Darkness – Blast from the past and however you look at it…big news comeback!! And I like em despite the spandex 🙂

Def Leppard – Right now this is where it starts to get to me. For the life of me I don’t get this one. Headliners? Seriously? Some may defend this rigorously but I can’t help thinking “dated and dull”. Can we not do better than this Mr Festival Organizer? What do you guys think? Am I being harsh? The mere mention of them as headliners has me reaching for the coffee and fighting off sleep.

So overall doesn’t look great to me…but that’s not the point. The point is…what does everyone else think? Particularly those of you who are going.

Funeral For A Friend – Started off great, went soft but still interested to see what they sound like these days.

Twisted Sister – Kill me now. Time to grab a burger. Ah!! Queue looks small at the lav now (it won’t be when these are on by the way). All phrases that will spring to mind with a band that…well…just….zzzzzzzzzz

Alice Cooper – Rock legend – master of annoying the holier than thou brigade – Mr stageshow!! Yep..there he is, somewhere in the small print. Has the world gone mad. Old? Yes! Dull? No! Just cannot believe he is so far down the pecking order. Thoughts please!! 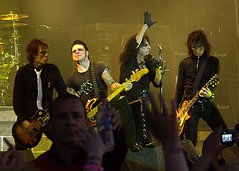 Skunk Anansie – I quite like Skunk Anansie and always have, the vocals and general style they have are well worth a listen to those who

have not heard any of their music before.

System Of A Down – This is what headliners are all about. Absolute genius at times. Well done Download.

Frank Turner– I have no clue. I am deeply ashamed but once again I have to check this one out.

The Cult – I seriously don’t know whether I like them or not. Sometimes I do, sometimes I don’t. Metal? Gothic? Metal Gothic? Dunno?

Rob Zombie – I couldn’t give a toss. Another burger and loo visit for me 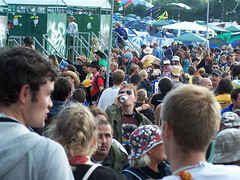 Next up Disturbed. Well here’s where you get your own back because I have always loved this band. Just pure metal for me!!

to listen to an album of theirs without skipping tracks. Having said that, “Brilliant live” I’ve been told.

Then onto the last big act, Linkin Park. Now I really believe that along with the likes
of Limp Bizkit these guys were responsible if not for the resurgence of metal then they
were at least responsible for making a whole new generation aware of metal.
Their first album was played everywhere and I too, bought and cherished that album and
then for their next effort they rehashed it. Now I never really recovered from that and
since then have found their music to be a bit samey. But credit where credits due, a good headline act.
As for guys further down the bill, I must give a special mention to Madina Lake who once stopped me running up and down the M5 motorway shouting “Wally” during a 4 hour traffic jam on a red hot day with the car next to me booming out r’n’b. Thank god for that first album. Also a special mention for Puddle Of Mudd, and no, not for “She Hates Me” and not for “Blurry” but for “Nobody Told Me” which expresses a refrain which we all can empathise with. Check it out below…

As for the other bands well I honestly don’t know enough about them or don’t like them.

But my point with this post is that Download looks a bit dull to me. I hate saying this because it’s a metal festival and a good one at that, but I have doubts about it and maybe I’m wrong?

So this is just a personal take on it and more importantly what do you guys think?

Is the line up dull or great overall?

Should Def Leppard be headlining? Apparently (see link below) Metallica are boring. And Def Leppard are not??? Gimme strength!!!!

Are there bands performing who simply don’t belong there?

Are the sets too short if you’re not a headliner?

Have I not mentioned some bands who are brilliant?

Does anyone give a toss as long as there is a beer tent?

I leave you with Phil and the boys performing a classic…