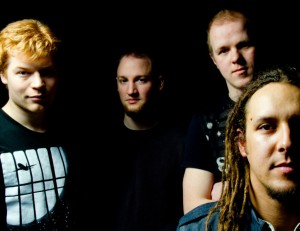 Find A Fiend are a London-based band who seem to have a large range of influences. The nearest band to them in terms of style I can think of is Biffy Clyro. To the best of my knowledge they have only one album release which was  the self-titled Find A Fiend back in 2008. The band have a new album on the way though and given the mix of nationalities and influences within the band, this should be one we all keep an eye out for.

In the meantime you can still buy the first album, which is well worth the money. Find A Fiend tread the twisting road of the short progressive styled artist. You won’t find any 20 minute marathons here and neither will you find orchestral keyboards or long technical guitar solos. Find A Fiend deliver shorter songs around the four-minute mark and if you like your rock stylishly delivered without the length of many bands, then Find A Fiend might just be your cup of tea. For me personally these guys sit in the new wave of shorter progressive rock along with the likes of Von Hertzen Brothers and Shaolin Death Squad. The opening track is a short instrumental which is pleasant enough before the opening track proper which has one of the best song titles ever; ‘Every Love Song Is A Wolf In Sheep’s Clothes’. The Biffy similarities are very evident on this opener but are almost completely dispelled on the following track, ‘Cassiopeia’ which is altogether more stylized with prog style keys floating around it. ‘Trust’ sounds more like Biffy Clyro than Biffy Clyro do,  though with the added plus being the strength of the song itself. Find A Fiend have a nice clean production on this album and coupled with the fine guitar work and thankfully, superb vocals and harmonies, we have one of the better releases of 2008. ‘Fly Away’ has an altogether more laid back feel and more of a  folk structure to it. ‘Equinox (White Masks)’ returns to a more upbeat tempo with its clever harmonies and compelling guitar work. ‘Bound To Ashes And Rust’ is a slower offering; again sounding very much in the Biffy vein, but whatever the comparisons it is a fine song  with a fine technical delivery.’Lost Souls’ is probably the weakest track for me as I find my mind wandering every time I play it but thankfully this is followed up by the much livelier ‘Staring In The Eyes Of Despair’. This has so much variation both melodically and rhythmically that it’s surprising they have managed to pack it all into 4:35 mins. Possibly my favorite track along with ‘Trust’; this promises much for the future and finishes all too quickly. ‘So Close, So Far Away’ is the album closer and this is a ballad with string like licks exploring the clever guitar work and this ranks up there with Trust  and Staring In The Eyes Of Despair. If this album has an anthem on it, then this is the one. Listening to the album in its entirety, you can only begin to imagine what Fiend might do with a bit of money behind them. At this point it is probably worth including the track on here so that you can judge for yourselves.

Find A Fiend have a quality that stands out and puts them head and shoulders above their competitors. Inevitably people will point the finger and say that they sound an awful lot like Biffy Clyro, and in many respects that is true but surely that’s no bad thing. There are an awful lot of bands out there who sound like the Biffs,  but not an awful lot who sound as good as this. If you’re a Biffy fan and you haven’t heard these guys or maybe Von Hertzen Brothers, then you are missing out, trust me. If you are a music fan longing for new quality bands to throw light into your world then your world is a lot darker without the sunshine of Find A Fiend gracing it.